UDATE: The cupcake tips I used for the frosting on this are on sale on Amazon right now – get the  cupcake decorator’s set for only $6.06 – down from $8.99! (This price can change anytime though – so look before you buy!)

After the many requests for this recipe and how-to, I thought I’d take some pictures and post this recipe.

My brother in law is getting married tomorrow, and since he and his lovely bride-to-be met at Starbucks, a Starbucks themed rehearsal dinner – with these cupcakes for dessert – was quite in order.

Keep in mind that at the end, you’ll see two different kinds of cupcakes – I did Caramel Frappucino ones and Double Chocolate Chip Frappacino ones. The recipe you’ll see here is for the caramel ones. I borrowed very largely from this lovely blogger here for the recipe and inspiration!

For the Cupcakes:
Recipe heavily adapted from Apartment Therapy’s The Kitchn

Heat the milk in the microwave or on the stove until hot – stop short of a simmer. Stir in the instant coffee until well blended. Add the vanilla and set aside.

In the bowl of a stand mixer, beat the butter and sugar with the paddle attachment until creamed. It should be slightly fluffy. Beat in the egg yolks one at a time.

Scrape all the batter out into a separate bowl and wash the mixer bowl thoroughly.

Switch to the whisk attachment and beat the egg whites until stiff but not dry. They will hold a stiff peak but they will still slip around a little in the bowl.
Fold the egg whites into the cake batter gently, folding the batter around until well combined.

Fill cupcake liners with batter and bake at 350 degrees for about 20 minutes (they baked up surprisingly fast).

3/4 cup plus 2 tablespoons sugar
6 large egg yolks
1/3 cup water
1 package of Starbucks Via Caramel flavored coffee  (You can find this at Walmart in the coffee aisle for about $7 a bag – so make sure you make these cupcakes to make that one ingredient worth this one expense!) 🙂

NOTE: You can cut this recipe in half – you’ll have enough for one batch of cupcakes.  But sometimes you might like to have more…you know, just because.

Set bowl over saucepan of simmering water (do not allow bowl to touch water); whisk until candy thermometer registers 160°F, about 8 minutes. 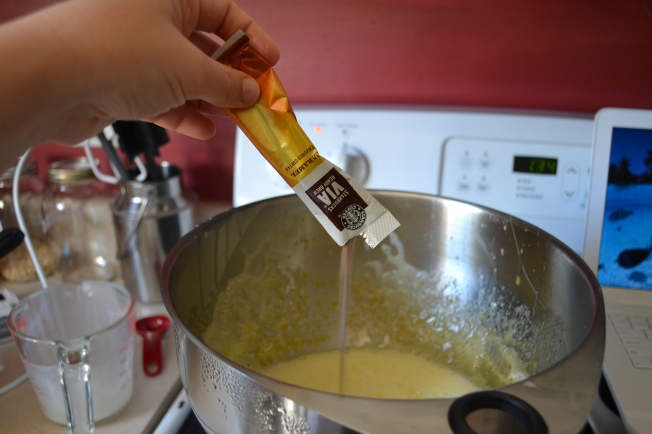 Beat cream in another large bowl until stiff peaks form. 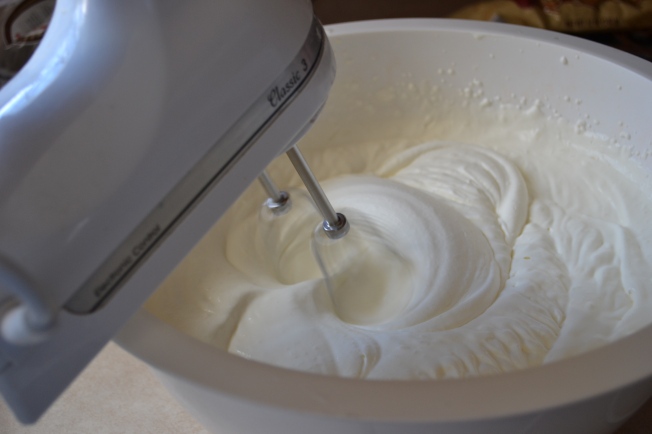 For the Homemade Caramel Drizzle – this one I didn’t do today because I had some already pre-made in the fridge…don’t skimp on this or (gasp!) buy it in a jar from the ice cream topping aisle – this stuff is AWESOME! I’m pretty sure it could cure chicken pox.

Cut butter into evenly sized cubes and melt over low heat in large 3-4 quart saucepan.
Once butter is fully melted, add brown sugar, being careful to avoid the sides of the pan. If any stray sugar crystals fall onto side of pan, carefully brush off with a wet pastry brush.
Once butter and sugar are fully combined, add corn syrup and condensed milk. Clip on candy thermometer to side of pan.
Cook mixture on low heat (still continually stirring) for about a minute or two. Increase heat to medium and continue to cook/ stir until mixture reaches 225 degrees. Once the mixture is removed from heat, stir in vanilla extract.

Heat sugar, egg whites, and salt in a heatproof mixer bowl set over a pan of simmering water, whisking until sugar dissolves and mixture registers 160 degrees on a candy thermometer.

Return bowl to mixer, and whisk, gradually increasing speed from low to medium-high, until stiff, glossy peaks form, about 10 minutes. Reduce speed to medium. Add butter, a few pieces at a time, whisking well after each addition. Whisk in vanilla. Switch to a paddle attachment and beat until air bubbles are gone, 2 to 3 minutes more.
To assemble the cupcakes:

Once cupcakes are cool, core out the center of each one. Using a pastry bag, pipe a small amount of caramel sauce, then pipe coffee mousse until the center is almost full, and then top with another piping of caramel.

Once all cupcakes are filled, pipe swiss meringue buttercream onto each one using a pastry bag fitted with a large star tip.

Lastly, use a sturdy plastic freezer bag or disposable plastic pastry bag with a small hole cut out of it and drizzle caramel on top of each cupcake.

Now for the special part –  (I always like to have some of these ‘special parts’ on hand) – take some starbucks straws – go ahead, stuff a few in your purse. One straw makes four tiny cupcake straws. Cut them in half, then in half again. 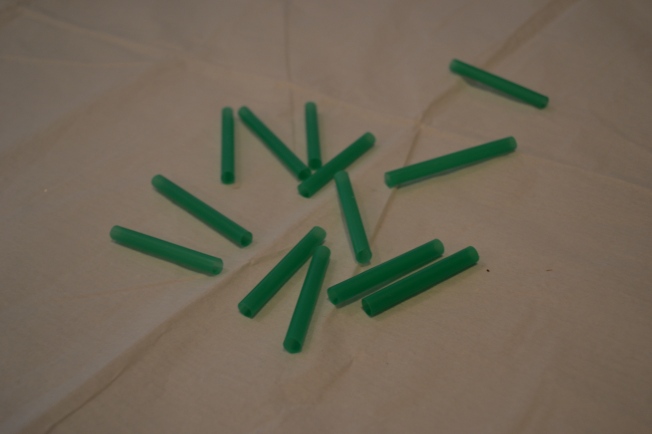 Stick one right into that yummy mousse filling and watch everyone try to drink their cupcakes. It’s quite humorous. 🙂 Enjoy these – they really  are a hit! (Check out my big confession and the Double Chocolate Chip Recipe here.)

Tell me what you think! Cancel reply

Looking for something particular? Search here: